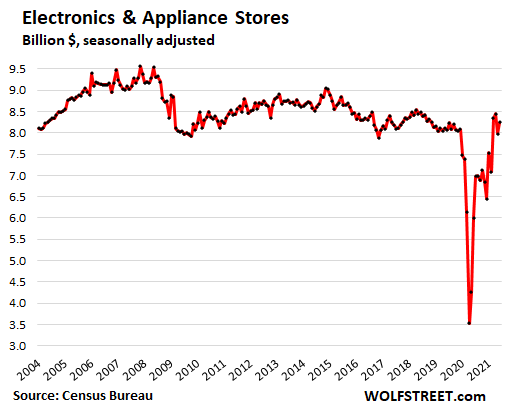 
Welcome to the Fed’s new world of inflation.

By Wolf Richter for WOLF STREET.

Retail sales rose 0.6% in June versus May, according to today’s Department of Commerce. But over the same period, the prices of groceries bought in stores rose by 0.8%; Prices in restaurants, delis, cafeterias, etc. rose by 0.7%; for gasoline by 2.5% and for durable goods such as household appliances, electronics, furniture, cars, etc. by 3.5% in just one month! These are the categories that make up retail sales.

And those huge price hikes in June outpaced the June retail sales surge and outpaced retail sales for the entire second quarter, suggesting that consumers were paying more to get less. Welcome to the Fed’s new inflation world.

Retail sales rose to $ 621 billion (seasonally adjusted) in June but stayed below March and April after falling 1.7% in May:

New and used car dealers and parts stores: sales fell by 2.0% in June to $ 132 billion (seasonally adjusted), the second consecutive month of declines since the historic WTF peak in March and April. Sales fell despite colossal price increases: 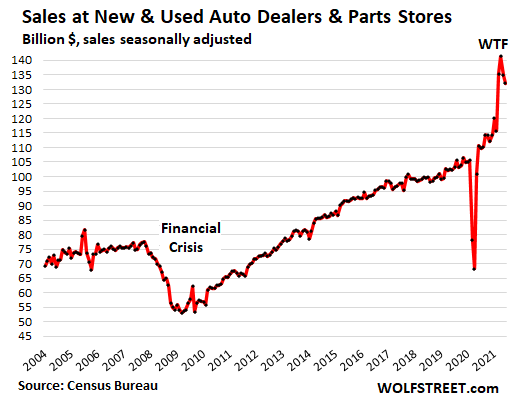 These colossal price increases were evident in the CPI for used cars, which rose by a previously unimaginable 10.5% in June and an equally unimaginable 45% year-on-year; and the new car consumer price index, which rose 1.8% in June as people bought far fewer vehicles but paid for them out of hand.

People who try to buy under these conditions are begging to be screwed. Just say no. Most people can put off buying a vehicle for a year or more because they can just keep driving what they have, what they did during the financial crisis when auto sales collapsed for a couple of years when people went on buyers’ strike. We can now see the first concerns about buying cars and trucks at these crazy prices build up. 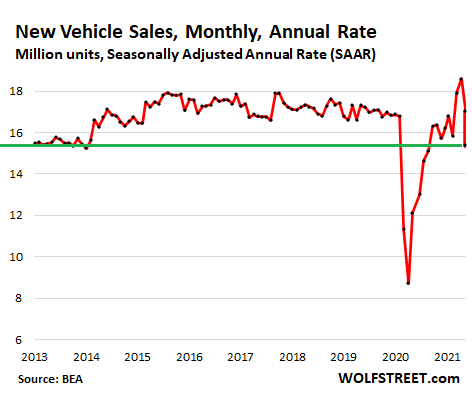 The retailer segments by size.

Auto dealers and parts stores are by far the largest segment in dollar sales, accounting for about 21% of total retail sales (black line). Non-store retailers, which are mostly e-commerce, jumped to second place (top red line) during the pandemic. In third place are grocery and beverage stores (green line), followed by bars, restaurants and other “food and drink places” (purple line), followed by general stores (such as Walmart) and building materials and gardening stores (such as Home Depot) followed by the rest: 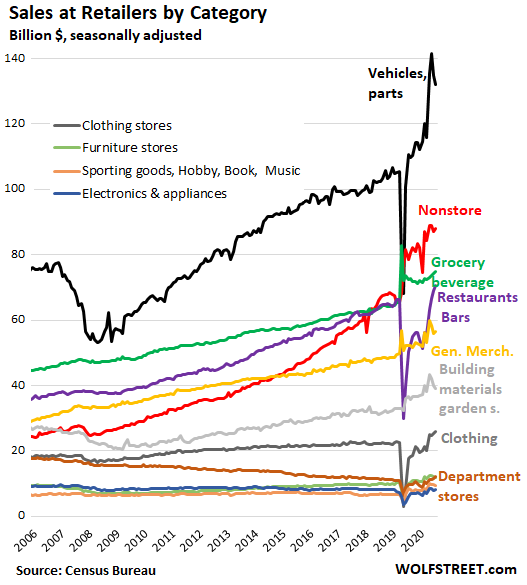 E-commerce and other “non-store retailers”: sales increased by 1.2% in June from May to $ 88 billion, seasonally adjusted. Compared to June 2019, sales increased by 31%. These include e-commerce sales through purely online retailers and through the online operation of stationary retailers, sales in mail order, at street stalls, vending machines, etc. 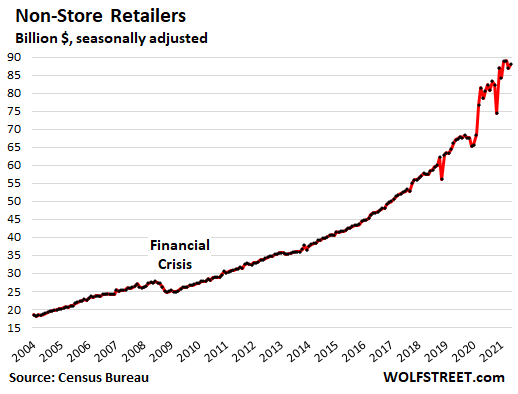 Food and Beverage Markets: Sales Up 0.6% to $ 75 billion in June as the consumer price index for groceries bought in stores rose 0.8% – paid more to get less.

Working from home, not working at all, and starting small businesses away from home has shifted some of the consumption from commercial buildings to households, and hence to supermarkets. 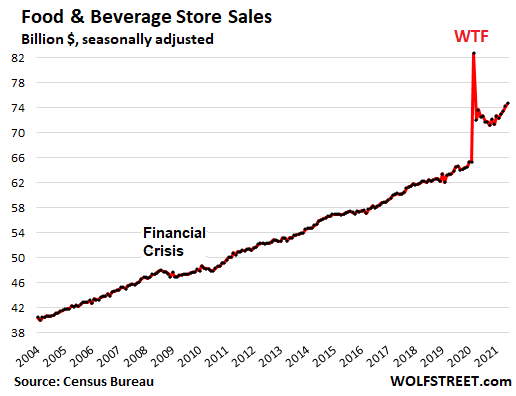 Restaurants & Bars: Sales increased by 2.3% in June to a new record of $ 71 billion, amid widespread price hikes. 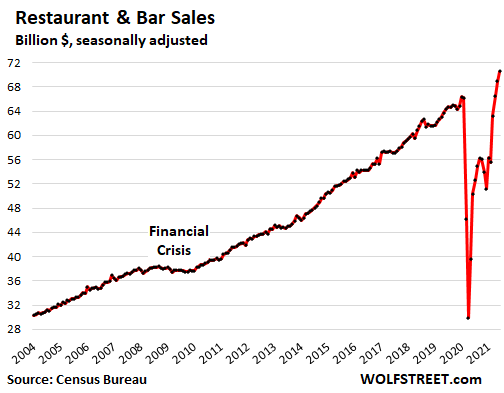 General stores: sales up 1.1% in June to $ 56 billion, after two months of decline and 17% from June 2019. This segment includes the brick and mortar stores of Walmart, Costco and Target; but not their ecommerce sales included in “non-store retailers”: 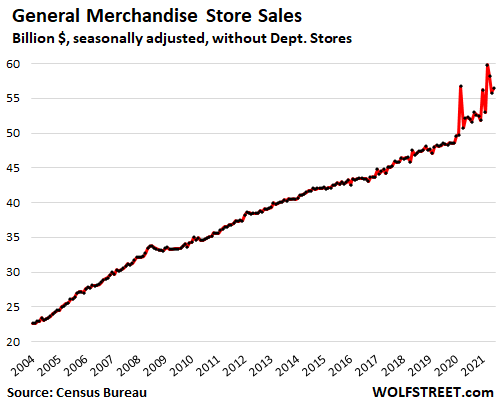 Building materials, garden and equipment stores: sales down 1.6% in June, the third straight month of declines to $ 39 billion, but still up 25% from June 2019: 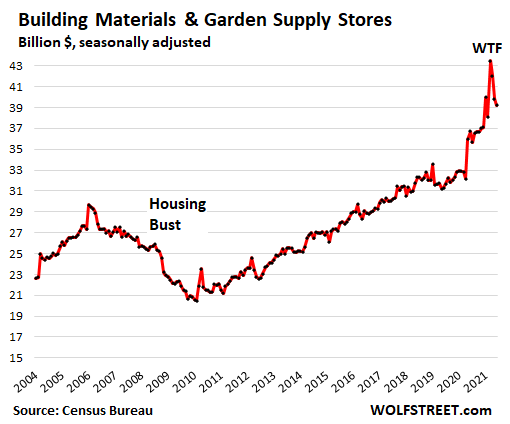 Petrol stations: sales increased by 2.5% to $ 47 billion in June, as the average price of gasoline also rose 2.5% in June, suggesting consumers bought about the same amount of gas but paid more for it. Gasoline prices are now at the level they have been since October 2014, when the oil bankruptcy began, and sales at gas stations followed. Selling at gas stations includes everything else they sell, from sodas to motor oil: 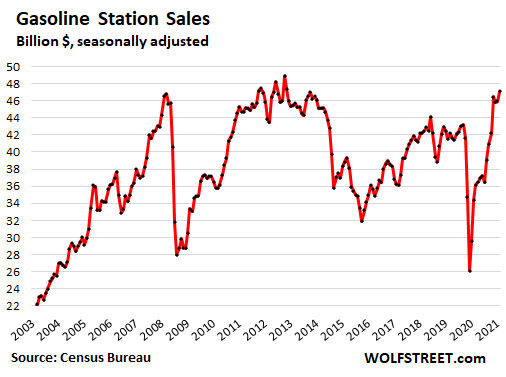 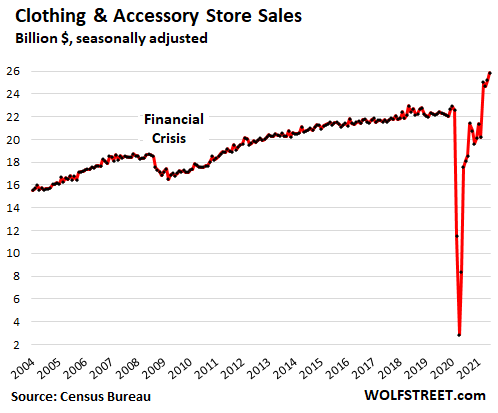 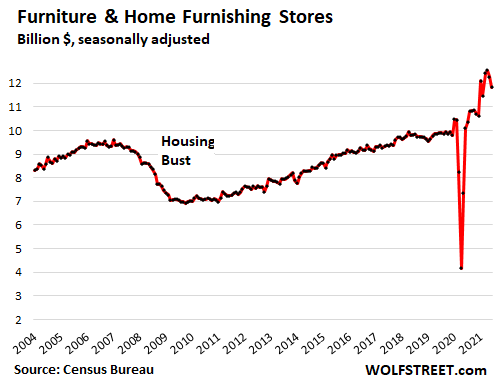 Department stores: sales increased by 5.9% for the month to $ 12 billion, up 7.1% from June 2019. This includes brick and mortar sales from Macy’s, Kohl’s, JC Penney, etc., but not their ecommerce sales: 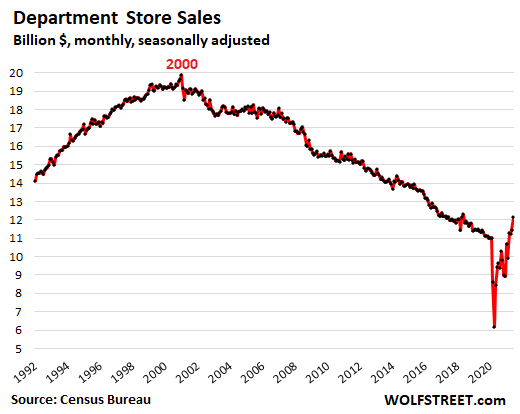 Sporting goods, hobby, book and music stores: sales down 1.7% for the month to $ 9.4 billion, the third straight month of declines after rising in March. Compared to June 2019, sales increased by 38%: 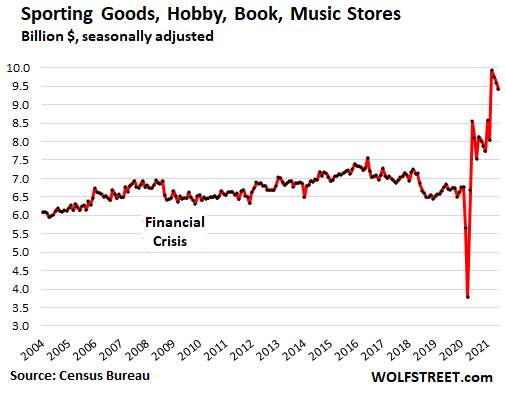 Electrical and household appliance markets: sales up 3.3% for the month, up 2.1% from June 2019. Most consumers buy electronics and home appliances online, a booming business, and sales in these brick and mortar stores have been going down for years, until they are now below their levels in 2005:

Have fun reading WOLF STREET and would you like to support it? Using ad blockers – I totally understand why – but want to support the site? You can donate. I appreciate it very much. Click on the beer and iced tea mug to learn how:

Would you like to be notified by email when WOLF STREET publishes a new article? Login here.

See our sponsor, Classic Metal Roofing Systems, discuss the benefits of using the products they make.