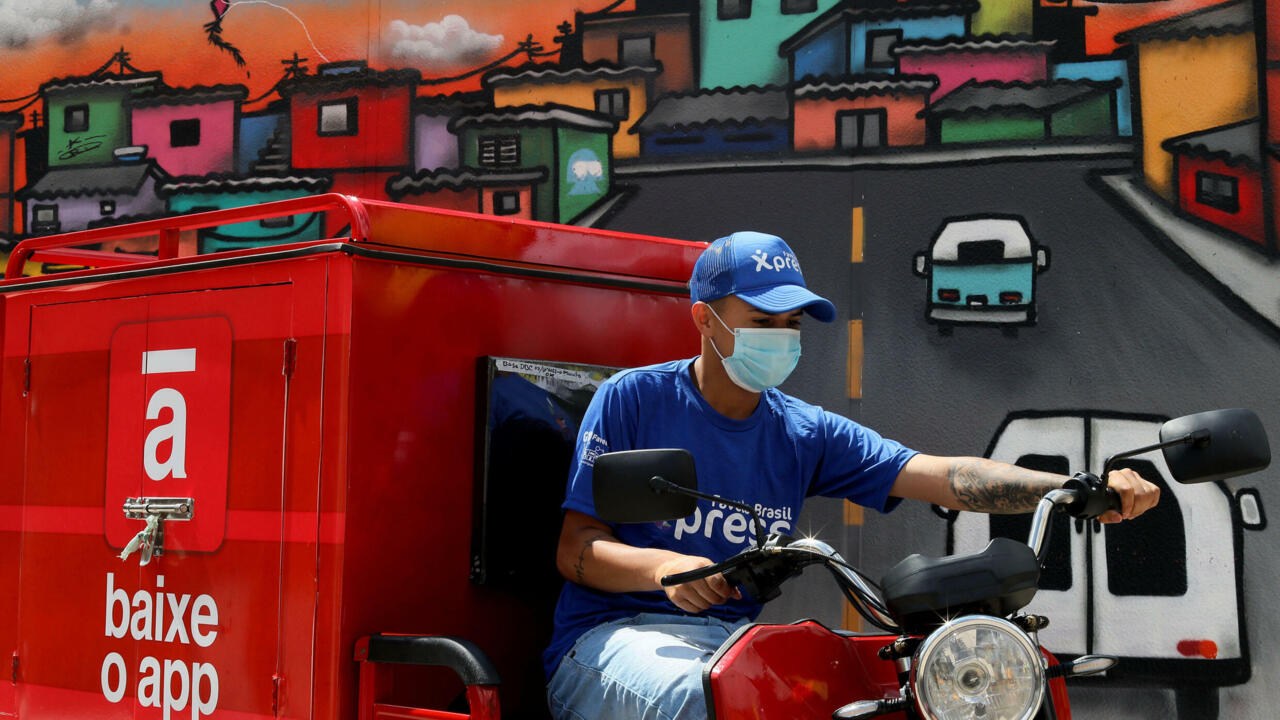 Sao Paulo (AFP) – Clapping their hands, ringing bells and shouting at the top of their necks to find the right recipient, the delivery staff of the Brazilian start-up Favela Xpress dare to go where traditional companies don’t go: the slums.

The company started in April in Paraisopolis, Sao Paulo’s second largest “favela”, an extensive barracks settlement with 100,000 inhabitants with a labyrinth of improvised streets and without an official address system.

But resident and entrepreneur Givanildo Pereira, 21, says he has decided it is time to “tear down the invisible walls that separate poor communities from the urban fabric of our cities.”

The service has made it possible for the residents of the favela to shop online from their home address for the first time, just as the coronavirus pandemic has made access to e-commerce more important than ever.

“There is a lot of catching up to do because (traditional delivery services) have always automatically blocked Paraisopolis postcodes as a high-risk area,” Pereira told AFP.

“When we deliver packages, we also bring dignity and a sense of belonging to society to people. You have the same right to receive a package at home without prejudice. “

Favela Xpress works with traditional delivery companies to provide the “last mile” service by collecting parcels at a distribution center on the edge of the favela and delivering them to recipients.

It uses a map developed during the pandemic by a network of Paraisopolis community leaders who wanted to help distribute food and other donations to residents, many of whom lost their livelihoods when the economy stalled in Covid-19.

Pereira, who has lived in the favela since childhood, has made a point of hiring locals and using their knowledge of the neighborhood where house numbers don’t follow any easily recognizable order.

The jobs came as welcome opportunities amid the pandemic.

In the distribution center in Paraisopolis, the 28-year-old Imael Silva Maia organizes the delivery of the stacked devices, technical devices, toys and other packages.

“I’m a tattoo artist by trade, but the pandemic has dried up my work,” he says.

“I do a little bit of everything here – sorting, logistics. I even deliver when I need it. We’re improv experts here.”

It has around 300 employees, including salaried employees and self-employed deliverers.

It has expanded from Paraisopolis to six other favelas, including Rocinha in Rio de Janeiro, the largest favela in Brazil with almost 26,000 households.

Some of Brazil’s leading retail chains have partnered with Favela Xpress to reach previously unreachable customers.

Recently, the company also became the first company from the favelas to launch a crowdfunding campaign to raise capital.

The company accepts contributions as low as $ 2 and is now selling shares to investors in exchange for a portion of its quarterly earnings.

The potential is huge: Brazil’s 13,000 informal settlements move an estimated 30.5 billion US dollars per year, according to the G10 advocacy group.

The crowdfunding campaign is compared to a kind of “favela IPO”, the initial public offering of large companies when they go public.

Investors make their payments via the DIVIhub platform, which carried out a profitability study of the business before the start.

The managing director of DIVIhub, Ricardo Wendel, called on the Brazilian financial regulators to pave the way for “an organized public secondary market, a kind of ‘favela exchange’ where people can buy and sell stocks”.

This proposal, which is currently being discussed in public hearings, is about to be implemented.

Wendel’s team has identified 18 companies that could be traded on the “Favela Stock Exchange” when they open.

Pereira now dreams of turning his company into the first favela “unicorn”, the term for start-ups worth more than one billion dollars.

3 lenders will bounce back amid today’s Fed decision