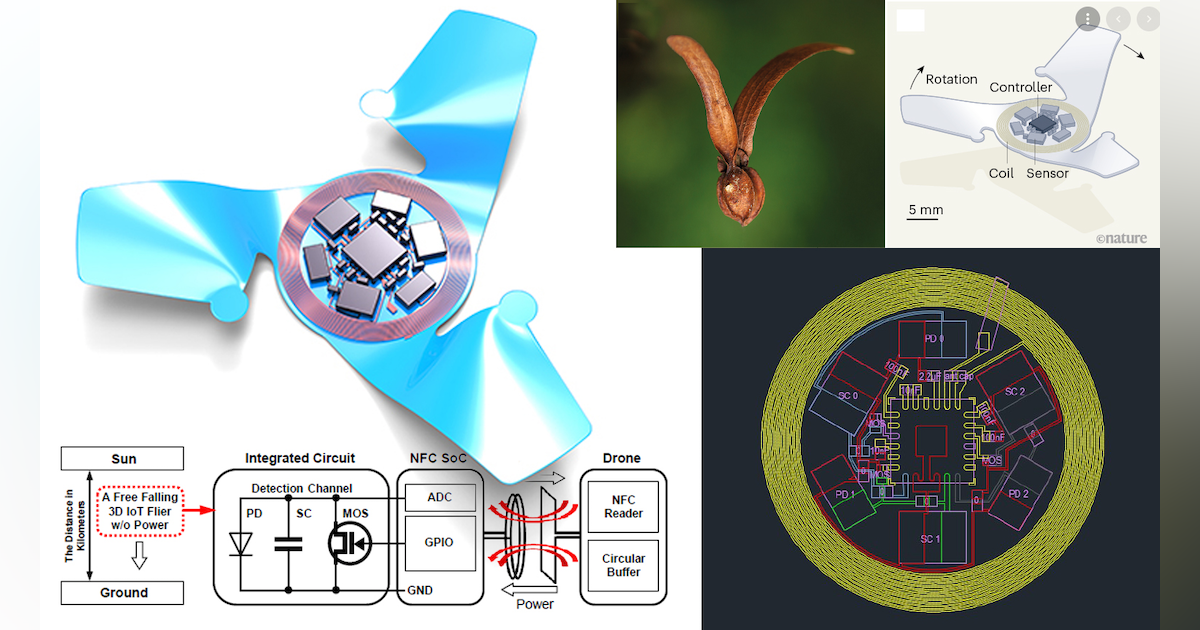 What you will learn:

Just when you’re thinking that micro-data acquisition systems can’t get any smaller, along comes a winged microchip that’s said to be the smallest flying structure ever made by man — and it’s got a sizable amount of electronics on board.

A multi-university team led by Northwestern University has developed and tested a microflyer that has no motor or propulsion. Instead, it flies in the wind — much like a maple tree’s propeller seed — rotating through the air to the ground like a helicopter, while the wings generate lift.

The team optimized the micro-flyer’s aerodynamics to ensure that when dropped from a great height, it would hover and fall in a controlled manner at slow speeds. This behavior stabilizes its flight, spreads it over a wide area, and increases the time it interacts with the air, making microfliers useful for monitoring air pollution and airborne diseases.

“Our goal was to add wing flight to small electronic systems, with the idea that these capabilities would allow us to distribute highly functional, miniaturized electronic devices to sense the environment for contamination monitoring, population monitoring, or disease tracking,” said John von Northwestern A. Rogers, who led the development of the device. “We were able to achieve that with ideas inspired by the biological world.”

The microflyers consist of two parts: millimeter-sized electronic components and their wings. The team analyzed and built various 2D and 3D wing structures, as no single structure is optimal for all conditions. A very successful four centimeter diameter wing structure weighed 14.6 milligrams (mg) and carried a payload of almost 75 mg (Fig. 1).

As the microflyer falls, its wings interact with the air to create a slow, stable spinning motion. The weight of the electronics is distributed deep in the middle of the micro flyer to prevent it from losing control and crashing to the ground in a chaotic manner.

While much of the work has focused on the microflyers, the mechanical design involves much more than a simple multi-bladed device that drifts and rotates while carrying the tiny onboard electronics. They examined design options and optimization of wing size, shape and curvature. The team also investigated design techniques for microscale (microplanes with wing half-widths under 1mm), mesoscale (mesofliers with half-widths around 1mm) and macroscale units (macroplanes with half-widths over 1mm).

By launching many of these microflyers and other flyers with appropriate electronics, ambient air conditions over an area can be monitored, to name just one application. figure 2 offers many perspectives on the project.

While many avionics packages are possible, a battery-free three-channel dosimeter for particulate matter monitoring was developed at great expense (Fig. 3 and 4).

When exposed to light, the photodiode continuously generates a photocurrent and a supercapacitor passively stores the accumulated charge. The supercapacitor bias is read by the analog to digital converter and is proportional to the total exposure “dose”. Simultaneous dosimetry at up to three different wavelengths is possible by selecting the photodiode.

A system-on-chip (SoC) for near-field communication (NFC) enables battery-free, wireless data transmission and power transmission. And a wireless-enabled general-purpose I/O (GPIO) pin supplies 1.5V to the gate of the MOS switch to trigger the discharge of the supercapacitor discharge. (They even provide a full parts list with manufacturer name, part description and part number.)

Rogers and his team designed and built many different types of microflyers, including the one described with three wings optimized to similar shapes and angles to the wings on one tristellate file seed. To locate the best structure, they developed and used computational scale models of how the air flows around their devices to mimic this tristellate file slow, controlled rotation of the seed.

Based on this modeling, Rogers’ group then built and tested structures in the laboratory, using advanced methods for mapping and quantifying flow patterns. His team first produced precursors for flying structures in flat, planar geometries. They then glued these precursors to a slightly stretched rubber substrate. When the tensioned substrate relaxes, a controlled buckling process occurs, which causes the wings to “pop” into precisely defined three-dimensional shapes.

What about potential junk from hundreds or thousands of these microflyers being launched and floating around? The project also anticipated this.

“We fabricate such physically transient electronic systems using degradable polymers, compostable conductors and dissolvable integrated circuit chips that naturally disappear into environmentally friendly end products when exposed to water,” Rogers said. “We are aware that recovering large collections of micro-aviators could be difficult. To overcome this problem, these environmentally absorbable versions naturally and harmlessly dissolve.”

The work is detailed in the abstract and paper with the largest number of co-authors I have seen (34!) “Three-dimensional electronic microfliers Inspired by Wind-Dispersed Seeds”, published in nature. While this post is behind a paywall, the paper is also available as a preprint here. The summary page (but not the preprint) contains active links to seven videos and expanded test result data.

Finally, there is a 43-page supplementary information file containing extensive analysis carried out for the project across many dimensions: fluid dynamics, mechanical modelling, fabrication, testing including the ‘wind tunnel’ arrangement and much more.