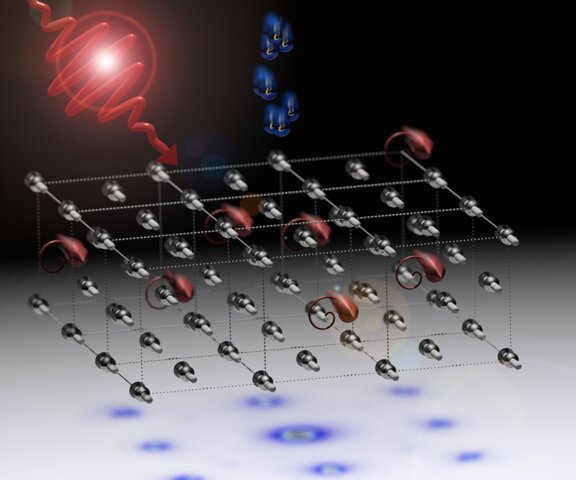 The mystery of the “lost” angular momentum

In a closed physical system, the sum of all angular momenta remains constant according to an important physical conservation law. Angular momentum does not necessarily have to be a “real” body rotation: Magnetic materials have angular momentum even when they are at rest when viewed from the outside. The physicists Albert Einstein and Wander Johannes de Haas were able to prove this in 1915.

The solution to the riddle has now been published in the specialist journal nature. In the study, a team led by researchers from Konstanz investigated the demagnetization of nickel crystals using ultra-fast electron diffraction – a measurement method with high temporal and spatial precision that can visualize the course of structural changes at the atomic level. They were able to show that the electrons of the crystal transfer their angular momentum to the atoms of the crystal lattice within a few hundred femtoseconds during demagnetization.

Similar to the passengers on a carousel, the atoms are set in motion in tiny circles and thus balance out the angular momentum. The macroscopic rotation effect, named after Einstein and de Haas, which can be measured mechanically, only sets in much later and more slowly. These findings show new possibilities for extremely fast control of the angular momentum and open up new possibilities for improving magnetic information technologies or new research directions in spintronics.

Magnetic phenomena have become indispensable in modern technology. They play a particularly important role in information processing and data storage. “The speed and efficiency of existing technologies is often limited by the comparatively long duration of magnetic switching processes,” explains Professor Peter Baum, experimental physicist at the University of Konstanz and one of the leaders of the study. A surprising phenomenon that can be observed with nickel, among other things, is therefore all the more interesting for materials research: ultra-fast demagnetization by bombardment with laser pulses.

Physically, like iron, nickel is a ferromagnetic material. These materials can be used to make permanent magnets of the kind we know from our everyday lives, such as fridge magnets. The permanent magnetization results from a parallel arrangement of the magnetic moments of neighboring particles of the material. “To illustrate this, we can imagine the magnetic moments as small arrows all pointing in the same direction,” explains Professor Ulrich Nowak, theoretical physicist at the University of Konstanz and also one of the project leaders. Physically, the angular momentum or spin of the electrons of the ferromagnetic material is what causes these “arrows” and their direction.

The perfect alignment of the magnetic moments can be destroyed within a very short time by bombardment with laser light. “A laser pulse of less than 100 femtoseconds is sufficient for this. Such laser pulses are among the shortest man-made events that exist,” explains Ulrich Nowak and continues: “The laser pulse heats the material so much that the arrows” – to stay with the picture – are spun around. At the end, one half shows in one half and the other half in the other direction.”

The law of conservation of angular momentum applies here, because the change in direction of the “arrows” changes the spin of the electrons and thus the angular momentum. However, since the sum of all angular momenta in the material must be conserved, the spin cannot simply disappear. Instead, it must be transmitted to another location in some form. How this can happen within femtoseconds was previously unclear and there were only contradictory theoretical considerations on this phenomenon.

How the mystery was solved

In order to solve the physical riddle, close cooperation between theorists and experimenters was necessary: ​​based on a hypothesis by the two Konstanz professors Peter Baum and Ulrich Nowak, a team from theoretical physics first worked out a series of predictions about possible atomic movements during the atom using computer simulations ultra-fast degaussing. The experimental physicists then checked these predictions through experiments with femtosecond lasers and ultra-short electron pulses. The team led by Professor Wolfgang Kreuzpaintner from the Technical University of Munich supplied the wafer-thin nickel crystals.

“For our experiment, we first magnetized our nickel crystal in a certain direction and then demagnetized it ultra-fast with a femtosecond laser pulse,” says Peter Baum, describing the basic structure of the experiment. In the meantime, the researchers led by first author Dr. Sonja Tauchert observes the crystal with ultrafast electron diffraction. With this method, information about the temporal changes in the structure of materials can be obtained – with atomic location accuracy and a temporal resolution in the femtosecond range. The resulting consequences of diffraction patterns – so to speak, atomic slow-motion recordings of the demagnetization – could then be interpreted with the computer-aided predictions of the theorists.

“Our experiments and simulations have shown that the angular momentum of the electrons is locally transferred to the atoms of the crystal lattice on the same time scale on which the magnetic order of the crystal is lost,” explains Ulrich Nowak. First, some atoms begin to move in circular orbits around their original resting position. Due to the interaction with neighboring atoms, this movement and thus the angular momentum is transferred very quickly to all other atoms. After all, the entire crystal lattice oscillates evenly on tiny circular paths. Physicists generally refer to such a collective lattice oscillation as a “phonon”. In the special case described, these phonons are circularly polarized and therefore carry angular momentum.

“This not only solved an old riddle of solid-state physics, but also provided experimental evidence that polarized lattice vibrations can actually transport angular momentum – very effectively and ultra-fast,” says Peter Baum. “The Einstein-de-Haas effect has an intermediate step to atomic dimensions,” he adds. Such effects could be used to control magnetic materials with laser light, potentially creating more efficient alternatives to traditional electronics. “We hope that this will enable us to manufacture improved components in the future. In contrast to today’s electronic circuits, these would work with spin transport instead of charge transport, which would be significantly more energy-efficient,” explains Ulrich Nowak. “By showing that lattice vibrations can transport a spin, we open a new, potentially promising avenue to novel devices in spintronics.”

Laser-Driven Spin Dynamics in Ferrimagnets: How Does Angular Momentum Flow?

Provided by the University of Konstanz

This document is protected by copyright. Except for fair trade for the purpose of private study or research, no part may be reproduced without written permission. The content is for informational purposes only.