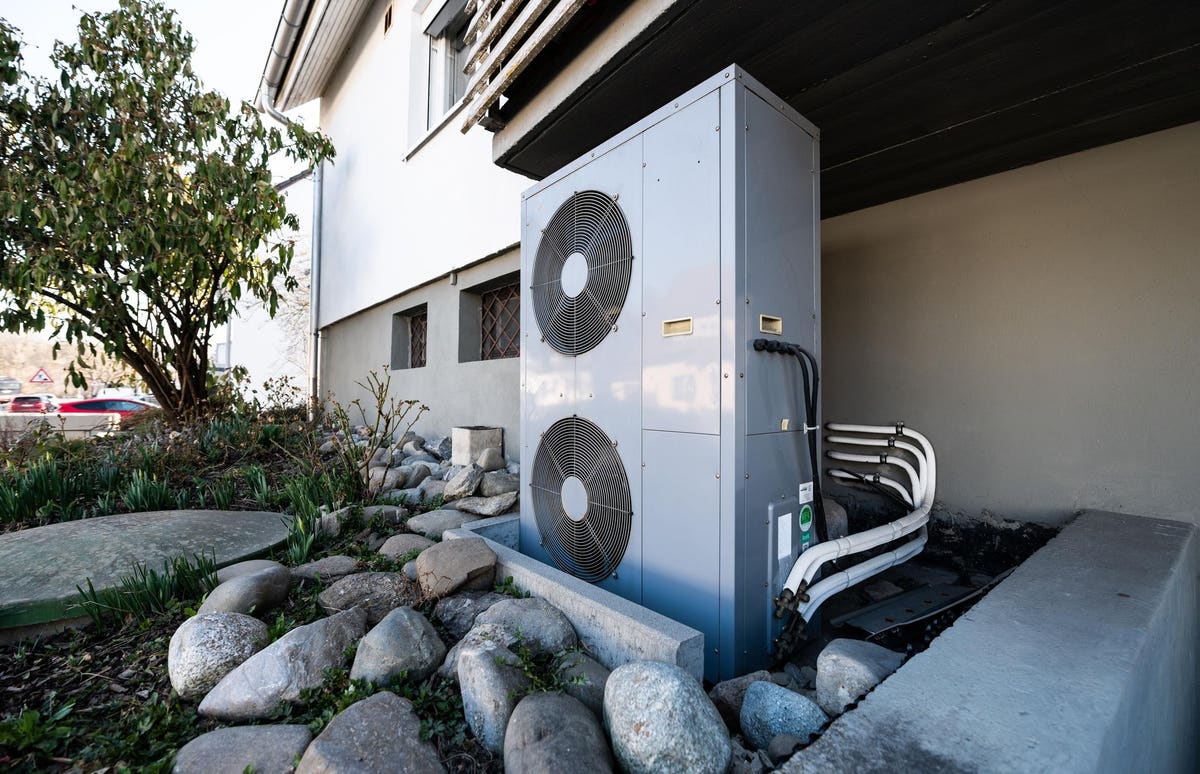 What’s hot about heat pumps, carbon handprint calculations, and a conversation about protecting the future?

This weeks current climate, which gives you a balanced overview of sustainability news every Saturday. Sign up to get it in your inbox every week.

Readers of this newsletter, the first issue of which was sent out a year ago on Sunday, will know that I did welcome feedback from the start via a Google form that can remain anonymous. Some of it was positive, some thought-provoking, some hostile—a particularly memorable one described this newsletter as “left-wing propaganda.”

There is a widespread but misguided notion that climate action is only the purview of one side of the political spectrum – everyone should be interested cleaner, cheaper and more efficient to power their homes.

Take for example heat pumps, Devices that are similar to air conditioners but can both heat and cool rooms as needed, moving heat from outside to inside or vice versa. Because there is no combustion, the heating process produces far fewer emissions than a fossil-fuel boiler and no nitrogen oxides, which degrade air quality. (Of course, the process requires electricity, which could make heat pumps more expensive to run than boilers, depending on local gas prices and taxes.) Also, heat pumps are three to four times more efficient at heating than gas boilers and have a lifespan of around 20 years — compared to the average of 15 years with a boiler.

Heat pumps have been around for years, but have long been considered a niche market, mostly for off-grid properties. Only recently as more and more consumers are looking for it less carbon-intensive ways to heat their homes, has increased demand and finally created the conditions for economies of scale. In the UK, a three-year government program is offering vouchers to cover 50-75% of installation costs, making heat pumps price-competitive with gas boilers, and earlier this month utility Octopus announced the acquisition of a Northern Ireland-based heat pump manufacturer Renewable Energy Devices (RED) , to increase its capacity to meet demand, which currently exceeds supply.

As this is my last week of writing this newsletter, I’ll close on a forward-looking note. In addition to presenting the usual big readings and news highlighting the advances and challenges in the fight against climate change, this week is climate talks shows a chat with an unusual breed of official – one tasked with safeguarding the interests of their country’s future generations. She explains what it all means and why companies are also getting involved.

Thank you for reading this newsletter; I hope you learned as much as I did. I’ll leave you to my colleague, science editor Alex Knapp, who also writes ours InnovationRx Newsletter (for which you can register here immediately). Starting next week, it will provide you with current climate information every Saturday.

Can we feed the Clean Energy Beast raw materials that require fewer imports?

The minerals used in today’s battery storage devices, such as lithium, cobalt, graphite and manganese, come from places that may not be conducive to democratic values ​​or strict labor laws. What are the alternatives?

The number of new diesel cars Sales in the UK have fallen by almost 90% in the last five years, campaigners say.

Sweden-based researchers have evaluated the 12 most effective measures to reduce vehicle use in urban areas – and are looking for a volunteer city to do so serve as a test case.

Researchers at the University of Texas at Austin said they used artificial intelligence to successfully develop a type of enzyme that can break down PET plastic into its molecular components in less than 24 hours.

The other big story

As changing weather patterns make droughts more frequent or severe in some parts of the world, attacking water resources in conflict zones is becoming a more devastating — and sadly, increasingly common — war tactic.

Four out of ten Americans currently live in places with unhealthy air pollution, according to the American Lung Foundation’s annual State of the Air report. It was published the same week as a Swedish study suggesting that even short-term exposure to traffic pollution is associated with an increased risk of Covid-19 infection.

to Mark Earth Day Last Friday, Google dedicated its Doodle feature to the impacts of man-made climate change on the natural environment in different parts of the world.

The lack of a financially robust recognition of the value of rainforests as carbon sinks is a major impediment to efforts to do so keep them and protect them from logging and agriculture.

Two new studies this week shed light on that threats from climate change on animal habitats, whether in the sea or above ground, where closer contact between wildlife and humans could fuel future pandemics.

Sophie Howe is Commissioner for Future Generations for Wales, an unusual role tasked with an official tasked with counteracting short-termism and ensuring government policy stays true to and converges with the country’s guiding principles. The corporate world can also learn something from this principle.

Your replies have been edited for brevity and clarity.

What led to the creation of this role?

When the Welsh government was formed in 1999 there was a clause in the legislation stating that government should have sustainable development as a central organizing principle. In reality, that didn’t mean much. Some ministers wanted to tighten the requirement, so they created this law [known as] the Welfare of Future Generations Act, which was passed in 2015 and required the appointment of an independent officer to oversee its implementation and necessary changes.

Which policy areas are most relevant to your work?

There are six areas that can make the greatest contribution to our long-term well-being goals: housing, zoning, transportation, job skills, tackling inequality, and keeping people healthy — not just treating sick people, but trying to prevent them get sick at all. All of these issues are interconnected and we look at them in an integrated and holistic way. Then we begin to provide long-term benefits for the future.

What changes were you able to implement?

I examine the Welsh Government’s budget to see if their investment decisions are investments for current and future generations. For example, while they increased their spending on direct action on climate change and renewable energy, they also spent about 25% of their infrastructure investment budget on building roads. So obviously one cancels out the other. We now have a whole new transport strategy and there is a moratorium on all road construction in Wales. Building roads to solve congestion is not in the interest of future generations because we just keep emitting CO2, we keep polluting our air. As commissioner, I was able to get the government to change not just that one decision, but to change the whole approach to transport. That’s a massive shift in how the budget is being spent in the interests of future generations. The other thing I would like to mention is reforms to the education system, which was unsustainable anyway. We were still working on imparting knowledge to children and testing them on how to retain that knowledge. That is why we have reformed our curriculum in Wales for ages 4 to 14, aligning learning with the principles of our Wellbeing Goals. Children in Wales are now being raised to be ethical and informed citizens, creative and enterprising learners and healthy and active citizens. Next, I’m working on reforming the national examination system for people aged 14 and over.

Do you think there is a place for a role like yours on a company’s board of directors or other governance institutions?

It could certainly be replicated in the private sector. Some companies are ahead of the public sector and governments on these issues because they need to think about the future to ensure their survival, particularly in relation to climate change and its costs – and invest now to ensure their long-term future. Although the law in Wales does not cover the private sector, I am increasingly being approached by the private sector wanting to know how to get on board. [Businesses] like the fact that there is a long-term vision for Wales that doesn’t change from one election to the next and can plan ahead accordingly. We are working with a number of companies to begin reporting their actions in line with wellbeing considerations.

When it comes to concerns about climate change, there is both fighting spirit and a certain defeatism, with posts on social media questioning whether the fight is even worth fighting, particularly among young people. What’s your reaction to that?

Defeatism is almost like the new denialism. We must not let ourselves be defeated. It is incredibly difficult for us to meet our carbon emissions targets in Wales and indeed around the world. But it’s not impossible. If you ever think you’re undersized, watch how Greta Thunberg, a young woman, has probably done more to raise awareness of climate change inaction than anything politicians have done. Wales is a small country and we are reforming our entire system to make it better, while at the same time trying to deal with the symptoms of a failed system. I’m realistic, but I’m also confident in what people can do when they need to gather around a shared vision.

California Attorney General Rob Bonta has one first study of its kind into Big Oil’s role in “causing and exacerbating the plastic pollution crisis”. Exxonmobil received a subpoena as part of the investigation, although the company denies the allegations.